ECZEMA, MY CHILD AND ME

I would like to introduce myself. My name is Rosemarie Julie Blum.

I am the mother of a little girl, Pauline, who was severely affected by eczema since she was 2 months old. She would wake up several times every night and scratch herself until she bled. During the day, she would start to scratch any time she was stressed, tired or angry.

Every time a new tooth erupted, she would have an eczema flare-up. It was a very tough and tiring period, with much anxiety for the whole family but of course especially for my little Pauline.

I myself suffered from atopic eczema as a child, and my younger brother, who is now 35, still has it from time to time. You can say that eczema has been with me all my life!

At the beginning of Pauline’s illness, I put her big brother’s socks on her hands to prevent her from scratching. But she soon figured out how to take them off!

Then I got some tape from the pharmacy and tied up her legs, ankles and wrists every day, sometimes twice a day if I had to change the tape.

But the tape scraped her skin off, which upset her even more. Strangers already stared at her because of the eczema on her face, but now they also saw the white stripes on her wrists and ankles. Almost everyone stopped to ask me what kind of disease she had!

One might have thought that we had just gotten out of hospital with all these bandages! On top of that, I was really sick of my child being stigmatized.

So how could I find relief for my daughter and protect her skin?

How could I go back to sleeping at night?

How could I dress her so that she would no longer be stigmatized?

We tried creams, but her skin became inflamed and we had to use antibiotics to treat the infections.

I had to find a solution that would relieve her itching and let her sleep peacefully at nights.

So I started doing some research. It could not go on like that.

With 15 years of experience as a fashion designer , I decided to apply my knowledge to help my daughter and all the children with skin diseases, atopic eczema or psoriasis.

I created a range of clothing specially designed for babies and children with skin diseases: 100% cotton OEKO-TEX clothing with built-in mittens, flattened seams outside the garment and without inner labels.

The pyjamas are designed in such a way that the child cannot slide his hand between the buttons at the back. (Pauline loved to scratch her legs!)

First I draw the models, and then my designer Cathy drafts the patterns.

I searched for two soft materials that would deliver optimal comfort and allow the skin to breathe. In the end, I chose 100% cotton and 95% cotton + 5% elastane for stretch.

Pauline tested all our prototypes for 6 months. She was the one who told us when there still some changes to be made to the models!

After six prototypes of each model, we came up with the perfect garment that prevents children from scratching while  also allowing them play or sleep in comfort.

In addition to comfort and practicality, I also wanted a nice look for my daughter that would let us forget about the disease for a moment.

Ever since Pauline has been sleeping in Maluna wear, her nights have become more peaceful. She is much calmer during the day and she feels better protected when she is wearing Maluna clothing.

Often when she starts getting tired, she stretches out her arms so I can put on her little Maluna jacket.

Whenever we go on a long drive, I put her little jacket on her. No more stress for her or for me! She is protected even if she rubs her mittens against her skin, and I can concentrate on the road without having an accident!

After a few days, it was clear: Pauline slept better and her skin was less irritated upon waking. She no longer had any superinfections and she was also better protected during the day.

Today Pauline is much better thanks to homeopathic treatments, her creams, the thermal cure in Avène, and our Maluna clothing.

I say “our” clothing because Pauline is also one of the founders of the Maluna brand. Maluna wouldn’t exist without her!

I sincerely hope that your children are healing and that you will find a little bit of peace, relief and some calmer nights with my Maluna clothing line. 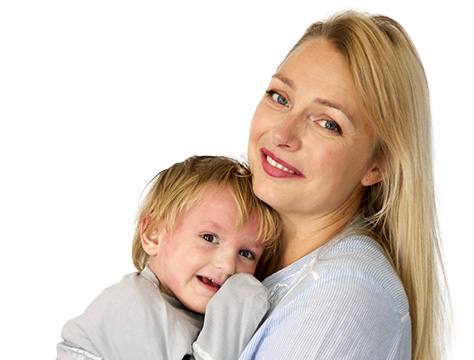